The growing importance of the Liquified Natural Gas (LNG) market

Executive Summary
The Liquified Natural Gas (LNG) Market will play an important role in tomorrow’s energy market as both gas and renewables are becoming the strongest growing energy segments in the years to come.
Although fossil fuels should be reduced in aggregate in the next decades. Significant environmental benefits can be reached by substituting coal with gas. Among fossil fuels, natural gas is the cleanest one – it has a high energy density but emits the least CO2 into the environment. Natural gas represents an excellent alternative to reduce greenhouse gas emissions and to help combat global warming.
The role of pipeline gas has been reduced over the last two decade from a share of 73% of aggregate volumes shipped in 2000 to an approximate share of 65% in 2020. China, as one of the biggest gas importers in the world is expected to significantly increase LNG imports over the next five years as pipeline capacity from Russia will be insufficient.
According to McKinsey’s Global Gas & LNG Outlook 2035, LNG demand could grow by 3.6% p.a. between 2018-35.

Transition to Gas in the Energy Mix
Climate change is not only an environmental issue, but also at the center of political debates and business concerns. In the next 20 to 30 years, the share of fossil fuels in the overall energy mix will gradually decrease and eventually be replaced to a large extent by renewables . Oil and coal, which are the main fossil fuels causing pollution, will see the biggest decline in the energy mix. According to the research study Global Energy Perspective 2019 from McKinsey & Co., oil demand has grown moderately at more than 1% p.a. over the last three decades, but is expected to grow at a lower rate from 2020 onward. Oil demand is forecasted to reach its peak in the early 2030s at 108 MMb/d. However, if energy markets enter into a quicker transition, oil demand could already peak before 2025 and reach roughly half of today’s level by 2050.

Coal demand has seen growth of around 3.0% p.a. on average over the last decade and is expected to fall by 40% until 2050. One prominent example is Korea, which is the world’s fourth-largest coal importer. Korea is now in a transition to more environmentally-friendly energy sources. In 2018, the ministry of Energy decided to temporarily shut down ten aged coal plants and limit the maximum output of 42 coal plants across the country below 80%. The country has also planned to increase the fuel tax on thermal coal by 28% while lowering the tax on LNG by 75%.

Shell is predicting that by 2070, the world is likely to use at least 50% more energy than it does today. In the transition from fossil fuels to clean energy, gas plays an important role both to meet energy demand as the world population and economy is expanding, and to reduce the sulfur and carbon emission into the environment. According to International Energy Agency (IEA), over the last decade, the world demand for gas has expanded on average by 2.8% p.a. In 2018, the growth rate has accelerated to 4.9% compared to 2017. According to McKinsey estimates, gas is the only fossil fuel with a predicted growth in total energy demand until 2035 (even considering significant sensitivities, gas demand remains robust within a +/- 3% range).

Environmental Benefits of Natural Gas
Among fossil fuels, natural gas is the cleanest one – it has a high energy density but emits the least CO2 into the environment. Natural gas represents an excellent alternative to reduce greenhouse gas emissions and to help combat global warming. It generates 30% less carbon dioxide (CO2) than fuel oil and 45% less than coal, with a twofold reduction in nitrogen oxide (N0x) emissions and almost no environmentally-damaging sulphur dioxide (SO2) emissions. 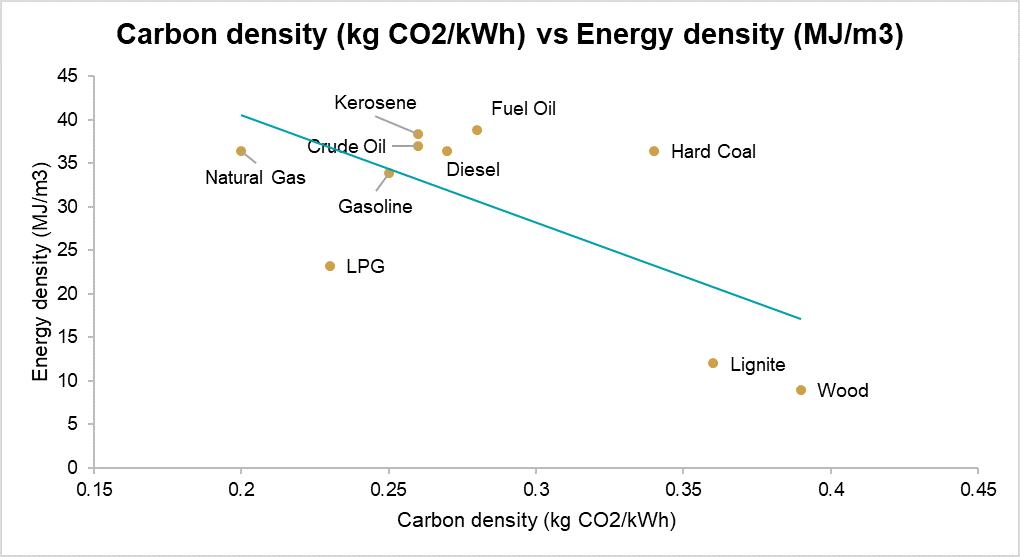 Vehicle transportation is one of the biggest energy consumers in the economy. By replacing diesel with natural gas, the environmental effects could be improved significantly. Emissions of carbon dioxide (CO2) could be reduced by 25%, nitrogen oxide (NOx) by 80% and carbon monoxide (CO) by 97%. Moreover, trucks fueled by LNG are able to cut the noise level significantly as opposed to equivalent diesel-fueled trucks. This would allow truck drivers to go through urban areas without causing noise pollution.

In marine transportation, the use of heavy fuel oil accounts for almost 14% of global sulphur emissions into the atmosphere. On the 1st of Jan-2020, IMO 2020 regulations (International Marine Organization) will come into effect, forcing shipowners to use cleaner fuel (with a maximum content of 0.5% sulfur) or to implement other measures in order to guarantee a greener environment. LNG is a more costly option for shipowners. But similar to the earlier example of road transportation LNG on ships represent a 25% reduction in carbon dioxide (CO2) emissions, a 90% reduction in nitrogen oxide (NOx) emissions, and a 100% reduction in sulphur (SO2) and fine particle emissions.
Within the power generation industry in Europe, 25% of electricity is still produced by coal-fired power plants. If these coal-fired power plants were replaced by thermal power plants fueled by natural gas, CO2 emissions of the European energy sector could be reduced by 60%, and 20% on a global scale.
China has transferred from a heavy-coal-dependent energy mix to cleaner energy sources, especially natural gas during the last decade. Total CO2 emissions have been curbed as natural gas is increasingly replacing coal (see chart below). 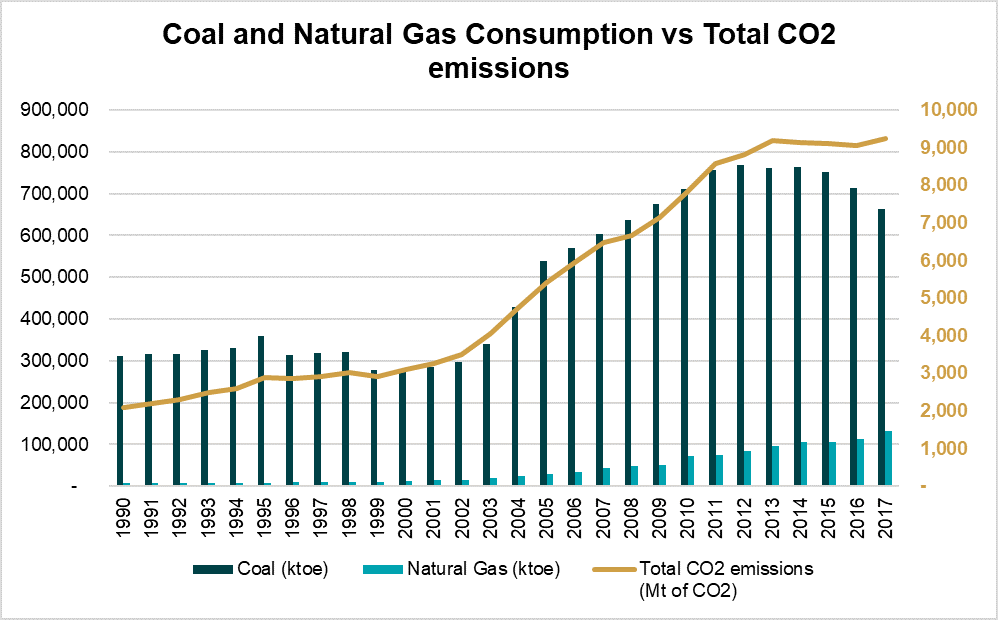 Natural Gas Transportation
In order to bring gas from production site to storage plant, there are two ways of transporting gas: Pipelines and LNG (liquefied Natural Gas). In 2000, 73% of the world’s gas was supplied through pipelines. However, the figure is expected to decrease to around 65% in 2020. The role of pipelines has been somewhat reduced as LNG operations can provide gas to a greater number of markets. The clear advantage of LNG shipping lies in the access to distant markets. These become uneconomical for pipeline transportation if the distance is beyond 3,000 km. Besides, importers can avoid lengthy negotiations on international pipeline routing and security enforcement by implementing LNG shipments. Moreover, pipelines can cause environmental issues which can be avoided by LNG shipping. 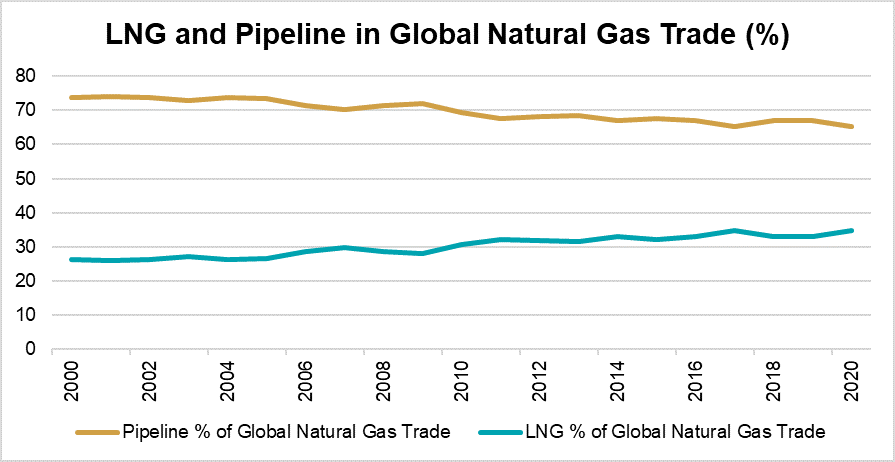 China, being one of the largest gas importers in the world is expected to significantly increase LNG imports. According to DNB Markets, the main pipeline gas import to China will come from Russia with an estimated 28m tonnes in 2022. However, LNG demand in China could rise to 115m tonnes by 2022. Given the constraints in regas-capaciy, seaborne LNG imports could increase to only 85m tonnes – but the figure is still a multiple of the expected pipeline gas volume. 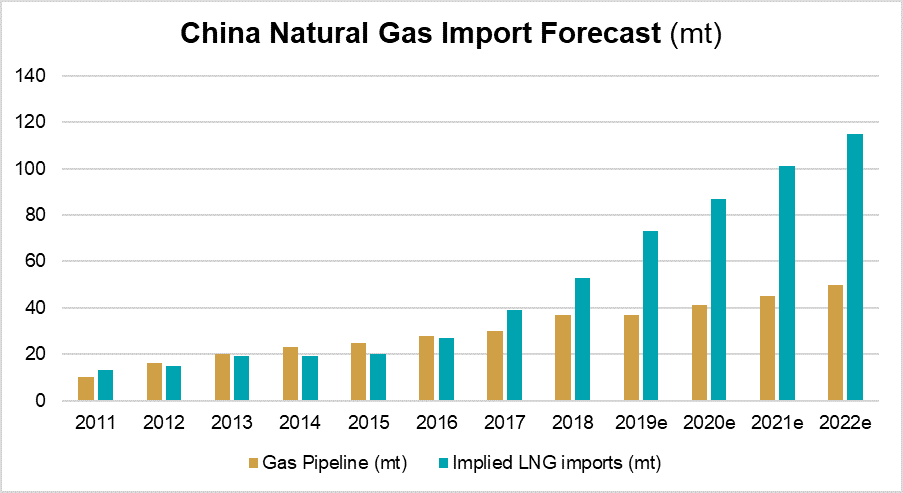 Supply and demand have been kept in close balance between 2013 and 2018. However, overcapacity in LNG supply is expected for the rest of 2019 and the subsequent years. This is due to the large amount of new liquefaction projects in the U.S, Russia and Australia. According to McKinsey, approximately 35% of new LNG supply capacity is under current construction, with expectations to come online in phases until 2025. With growing shale-gas production in the U.S., the country is in a position to join Australia and Qatar as a top global LNG exporter. The US’s new-build liquefaction capacity is expected to grow from 26.1 million tonnes per annum (mtpa) in 2019 to 210.3 mtpa by 2023. Of the total capacity expected to come online in 2023, 94 mtpa is projected to come from planned projects that have received required approvals for development while the remaining 116.3 mtpa could come from early-stage announced projects that are yet to receive any approval for developments. 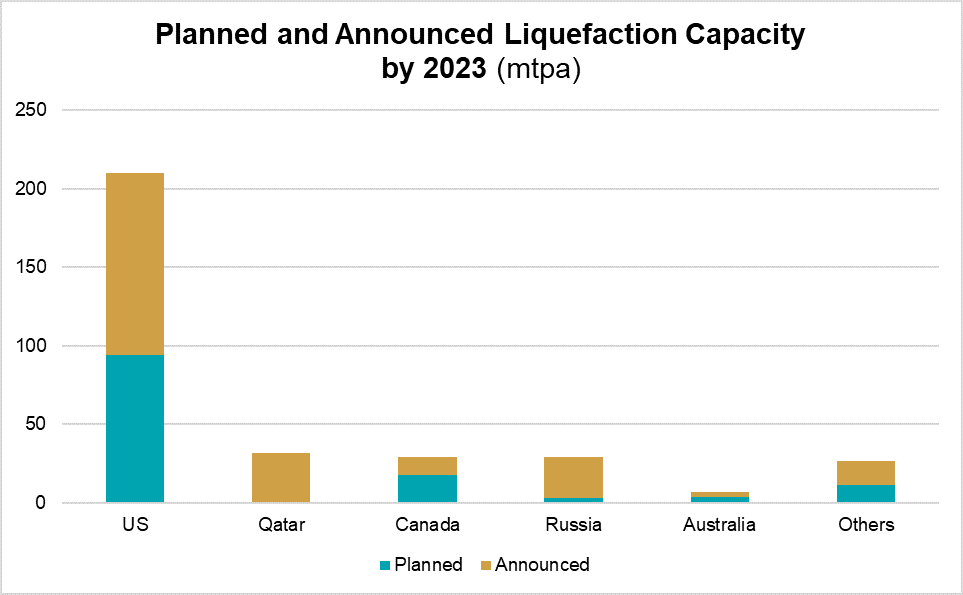 The power generation and industrial sectors in Asia and North America, and the residential and commercial sectors in Southeast Asia, including China, will drive the expected gas-demand growth. LNG demand is expected to outpace gas demand as Asian markets rely on more distant supplies.
Europe increases its gas-import dependence, as there is upside for gas consumption – at least in the near term – since coal and nuclear plants will be retired.
On the other hand, US producers seek overseas markets for their gas.
According to McKinsey, demand growth by the middle of next decade should balance excess LNG capacity in the current market and planned capacity additions. In order to meet demand by 2035, 250 billion cubic meters (or approximately 185 million tonnes) have to be produced.

Demand for LNG trading has increased dramatically over the last decade. From 2009 to 2018, there have been 184 more trading routes and an additional 20 importing countries. 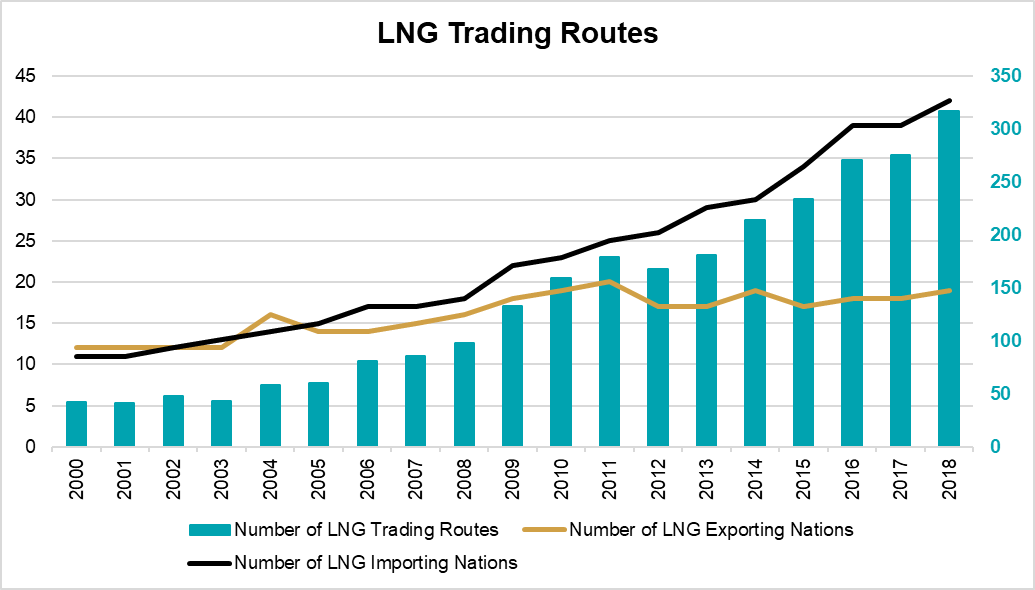 In June-19, China has increased the tariff to 25% on U.S. LNG. The uncertainty in trade tensions have made it difficult for both Chinese and U.S. companies to sign long-term contracts. 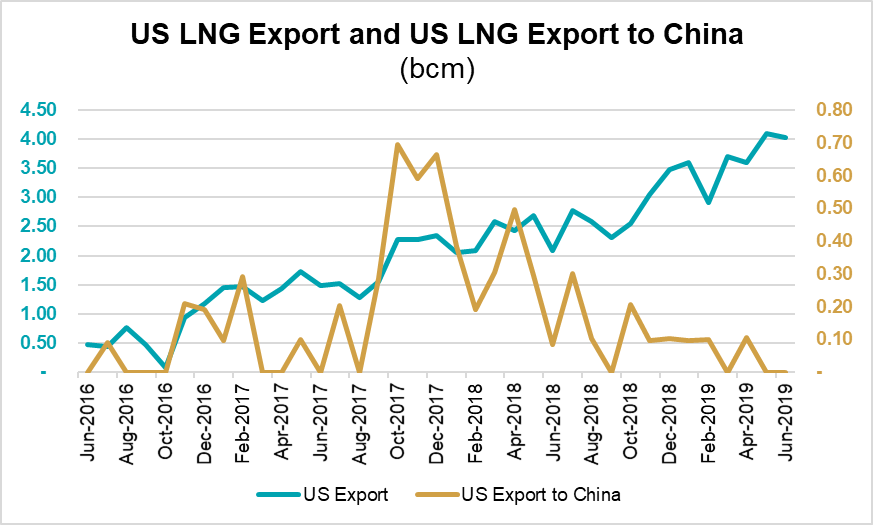 Ongoing trade tensions between the U.S. and China, however, opens opportunities for other countries to increase their capacity in the LNG market. On average, in 2018, the six countries in the graph below pushed their export to China by 41% on average. Out of these, Australia and Russia have realized increases of 42% and 64%, respectively. Further beneficiaries are commodity traders as well as large portfolio players, such as Shell, Total, BP, Chevron and Exxon as they have access to non-U.S. cargoes. 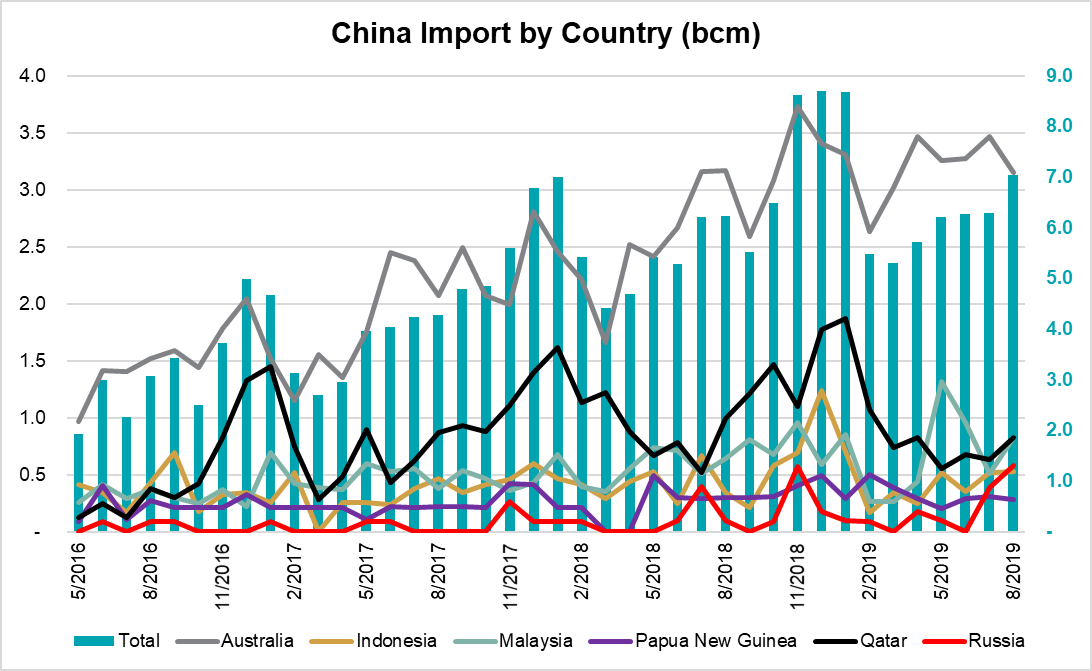